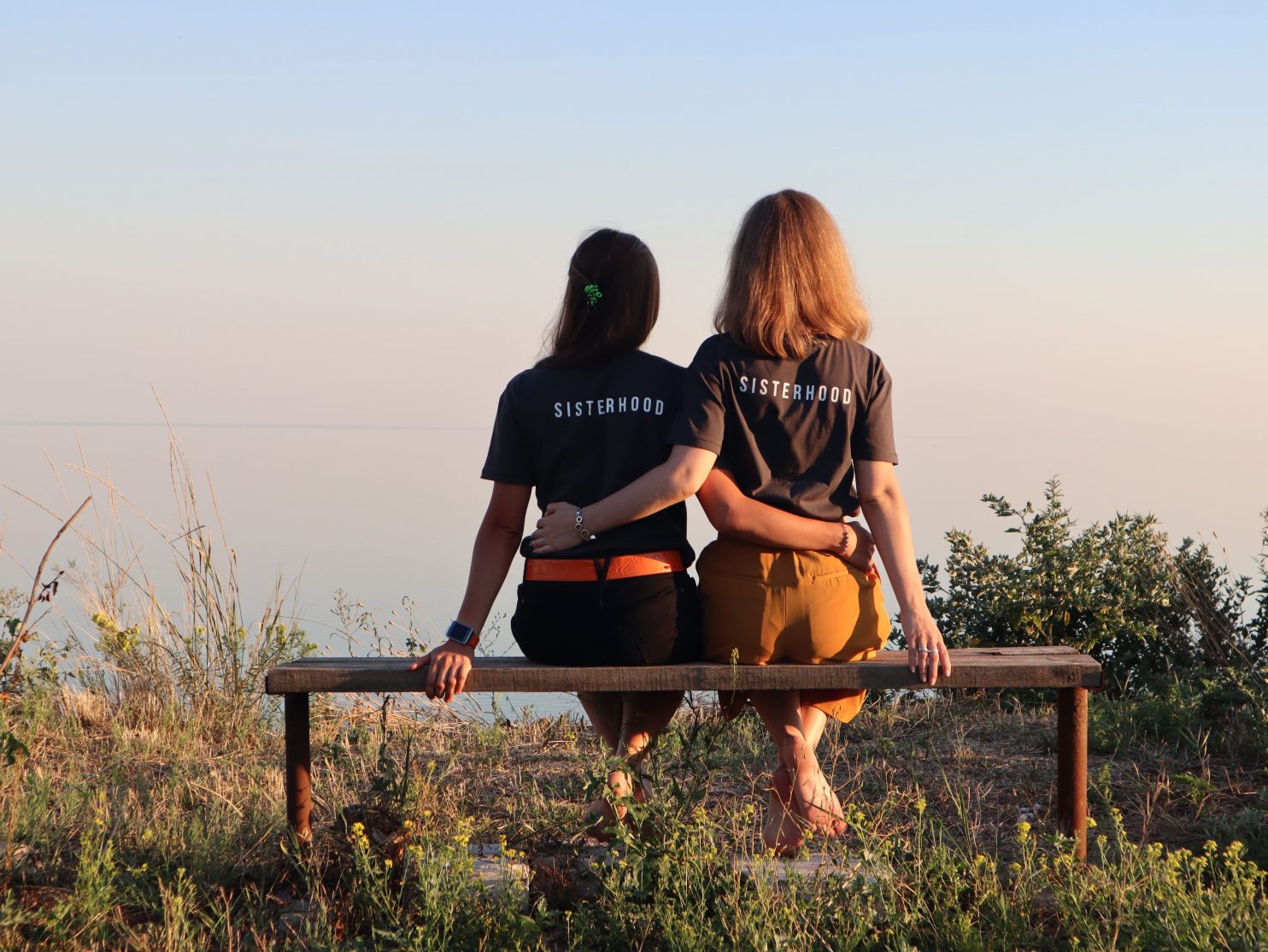 Some of you might know that Guilty Mothers Club was originally a supper club which was run locally in Manchester. The idea was to bring women together to try and figure out how working motherhood could, well, work. Now, four years on, we’re making some big changes and re-launching as an online womens club. Here’s the story and why we’ve decided to make the move away from online courses and back to community.

The supper clubs were really good fun. I ran them for about 6 months and really loved meeting new women and hearing from great speakers. We discussed all sorts from how to look after ourselves better, how to ensure our voices were heard at work and so much more – my background is in training and development so this was my thing.

But, if I’m being honest, I couldn’t afford to keep doing it. The nights, although wonderful, made me about £50 a time but took months of organising. Gazzy rightly kept nudging me to be more business focused, I needed a plan if I was going to turn this side hustle into a proper job. I also knew that I wanted to impact more women, I wanted to expand but I couldn’t see how using this format.

Around the same time I started running courses. Rock your Return helped women return from mat leave and was having some incredible results. Originally just from my front room or sat in the garden, we chatted things through eating homemade scones, it was as lovely as it sounded. Game Changers followed, a course for those wanting to make bigger career and life changes, the results were amazing. Eventually all the courses moved online, reaching more women than could fit in my lounge!

We’ve had over 1000 women go through a course or workshop of some sort over the last 2 years, something I am immensely proud of. Particularly as the majority of customers have come from word-of-mouth.

Then came a slight hiccup.

I hooked up with a really good friend to launch a kind of side project called The Mothership. It was a membership programme, something neither of us had run before. We worked so hard on it for over a year and got lots right I think but also quite a bit wrong. We loved working together so kept trying to put a plaster on things that I think we both knew weren’t quite right. Not helped by the fact I got pregnant and was absolutely knackered, feeling like throwing up every time we were together trying to figure out where next. It was taking up all our time but making us no money. I was barely pulling my weight at 8 months pregnant and aware that Anna, a hugely talented and successful photographer (seriously check her out), could have been earning so much more. I also wasn’t selling any courses because all my time was being spent on this.

I went to a talk by Holly Tucker (Not On The High Street) around this time which really resonated. She spoke about the importance of going with your instinct. She talked about, “knocking on the door of least resistance”. Eventually I think both of us knew it was time to call it a day on the project, it felt too hard, even though it was sad.

It feels horrible to fail at something, to openly admit you got it wrong, to feel like you’re letting people down. But our members were so amazing, I’ll forever be grateful for that. We received lots of messages of support and understanding. Rather than think of all the time we ‘lost’ working on it we were both keen to focus on the positives, the fun we had along the way, the stuff we learned, the people we met and the friendship we gained.

And then came along our gorgeous baby. I took a sort of ‘maternity leave’ and my husband Gazzy took over running GMC – mostly behind the scenes but popping up front when he could be persuaded. I wrote about how we shared our leave here.

Nothing like a baby and some long sleepless nights to get you thinking. To make you reflect and reconsider, remember your priorities, remember your why. I feel like I’d lost my way in 2018, I was doing too much work that didn’t set my soul on fire, probably too much work full stop. How could I keep encouraging others within Game Changers to be honest and brave about where they wanted to go next when I wasn’t being?!

I love designing and delivering development, writing, bringing people together – but these things had become a very small part of my day to day. Mostly I was doing social media, trying to teach myself marketing, the finances and admin. I used to think coming up with a killer idea or product was the hardest part of being an entrepreneur. Now I know that this is such a small part of the process.

I don’t think I have EVER worked harder in my life than in building this business. I’m not complaining, I have so much flexibility, it’s fun lots of the time, but easy it is not. Honestly, there were times when I considered walking away from it all, doing something entirely different. It felt daunting and overwhelming and quite unsettling actually. But luckily this isn’t my first experience of career shifting (or Game Changing as I call it) and I was ready to embrace these feelings of uncertainty. Unlike other times in the past I didn’t rush or tirelessly focus on trying to find a single perfect answer, I was able to take my own advice – I actually worked back through some of the content in my own course!

I regrouped, because, as we talk about in Game Changers, it starts with knowing your why, having your vision, knowing and playing to your strengths – otherwise you’ll be pushing on that resistant door and things just won’t click.

There was also a piece of feedback that kept coming up from the Game Changers course. Attendees would get going on these incredible changes in their lives, love the course but then after the 12 weeks the support would end as the course did. Turns out the answer was staring me in the face (this is also a very common scenario by the way). I missed bringing people together like in the good old days of supper clubs, and people were telling me they missed the community and wanted ongoing development!!!

I want to help women to get that promotion or project they deserve, challenge that decision that some barely competent man made in that meeting, apply for that flexible role. I also want to help with finding more time to exercise, more time to speak to a partner or friends, more time to be present with our kids, more time for ourselves full stop. Women are burning out trying to do and be everything and something needs to change.

Motherhood is this incredible, varied, whirlwind of an experience. It doesn’t have to be an either career OR family situation, it doesn’t have to be a spend time with the kids OR look after myself decision. We live in a society and work in environments designed by and for men so no sh*t that it feels like an uphill battle trying to fit our lives into systems that don’t support us. It’s like trying to force a key into the wrong lock.

THIS. This is my why.

Building a tribe of women who together can navigate and also challenge some of this. As a huge feminist the plan is to do a bit of a relaunch as an online womens club where we can talk honestly about some of this stuff without fearing retribution, where we can be ourselves, learn new things, define our own version of success then face the world with new energy. I want to help other women to find ways to make it work, break the rules because, in the words of Yoko Ono,

“If the rules are not broken, we will be”.

So, change is afoot.

A brand new online membership launches on 5th January and in the meantime I have pressed pause on all my online courses. A lighter version of the Game Changers course will form part of the membership so that many more women can benefit from it’s power.

I’m deeply excited by the opportunity to be around women who I know will inspire me to do and think about things differently, hold me accountable to my goals. I want to write more, I’d like to publish something next year. I want to get some of my creativity flowing, I want to design new development in unique ways. So I’ve basically created the membership programme I need – haha.

I won’t pretend I’m not still scared, that I don’t have to give myself a regular pep talk, that I have to avoid looking at my bank account considering I’ve not paid myself for nearly 6 months whilst all these changes have been taking place behind the scenes (don’t ask, it’s far from ideal but I feel lucky to even have been able to do this).

But the last 12 months have been truly beautiful and precious, I’ve clung onto my time with the fourth addition to our brood – something for which I’ll be eternally grateful, I’ve learnt a lot about myself and I’ve trusted my instinct.

And now, re-energised, we start the next chapter.

To hear first about the new membership launching in January, click here.

4 Comments on “Why we’re launching an online womens club”