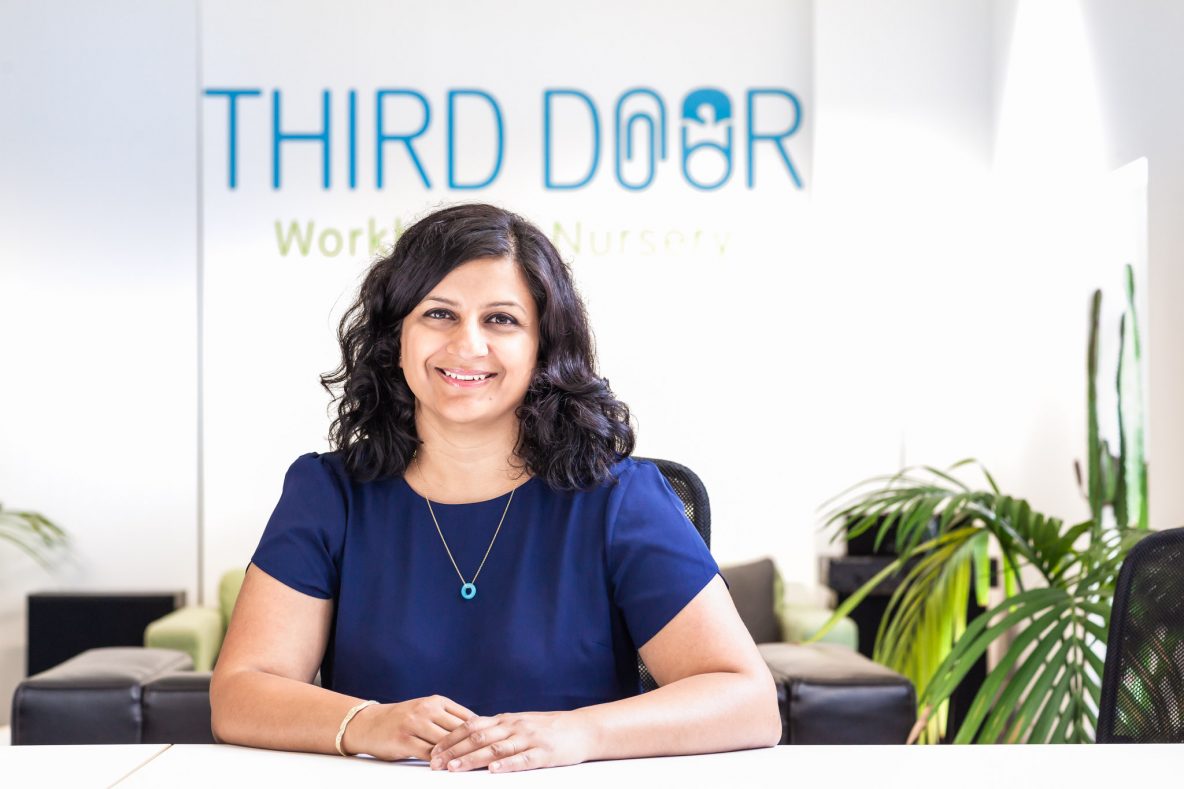 We all know the challenges that come with finding the right childcare. In this guest blog post we hear from the brilliant Shazia, founder of Third Door, about how when she struggled to find flexible childcare she took matters into her own hands…

A few months after I had my first child back in 2008, I knew one thing for certain; I wanted to return to work and further my career. However, like most new mums, I was reluctant to be far from my baby and wanted somewhere I could work in peace whilst my little one was cared for nearby. My husband was also studying for a self-funded MBA at the time and therefore his working hours weren’t what you might call ‘traditional’ hours either. Yet as hard as we looked, nowhere seemed to offer us a workable solution to our childcare conundrum. So, we decided to take matters into our own hands. As such, me and my husband, Yusuf, decided to set up Third Door, the UK’s first coworking space with an onsite flexible nursery.

In fact, my husband even decided to base his dissertation on the concept of a coworking space with onsite nursery – he was that invested in it. Ultimately, he understood the concept from the start, not least because he was living and breathing it, after all, what had been his office was now the baby’s bedroom and he was pacing up and down the living room trying to make work calls over the sounds of a vocal baby!

Back in 2008, the idea for Third Door was, quite frankly, ground breaking and mostly unheard of. The nursery industry was (and still is) pretty inflexible as a childcare option, with most nurseries requiring a certain number of days’ minimum commitment per week. This makes them an unaffordable and unrealistic childcare option for parents in a variety of circumstances: such as new parents going back to work part time, parents with multiple children, parents who wish to embark on a freelance career or set up their own business and parents who do shift work.

As Third Door has grown over the past 10 years, I have watched with interest as the concept has become more widely understood. And of course, I have been very interested to see how others have tried to replicate the concept (which I have welcomed). Demand for flexible childcare has grown as careers become less tied to traditional nine to five office hours, and remote or flexible working becomes more widespread. Parents love the fact that at Third Door you can simply subscribe to a bundle of childcare hours per month and use them as they need, depending on their work schedule or holiday plans. For example, parents can sign up for as little as 30 hours a month, or in contrast can sign up full time which especially works for employed parents. And most importantly all parents can flex up or down depending on their needs, swap days or even buy adhoc days if on a fixed day package. It’s been amazing to see our vision really take off and parents even travelling across London for our offering.

And it’s not just the nursery that people are interested in. Coworking spaces have also seen a surge in popularity over the last few years, as a generation of flexible workers seek efficient work places with other ‘colleagues’ to bounce ideas off or have a cup of coffee with.

The advantage for parents using our coworking space is that they are just upstairs and a short walk away from their children. This is certainly something that brings peace of mind. Not to mention the fact that it can cut out the daily commute almost completely and remove the risk of penalty payments if a parent were to get caught in traffic or arrive at pick up late. With the average daily commute time in London being 56 minutes, the appeal in being able to drop your child off at nursery and simply walk upstairs to your office has been revolutionary for many of our members.

The other thing parents tell us is that they love the fact we offer a welcoming and collaborative space for people who may otherwise have chosen not to, or been unable to, return to work. Often mums are returning to the workplace after a year or longer on maternity leave and it’s really hard for them. After all, going from being with your little one all day every day, to going back to work full time, alongside dealing with imposter syndrome, battling the commute and trying to get into the swing of childcare in the space of a few days is a lot to deal with, both mentally and physically. I love the fact that our mums and dads are able to ease themselves back into the workplace gently, whilst still knowing that baby is nearby and safe. The benefits it brings to mothers pumping or breastfeeding is brilliant too, with many of our mums just popping downstairs to feed when they want to. Plus, our parents always know there is someone to talk to who is probably going through something similar (or has done in the past) just the other side of the desk – and that is definitely incredibly reassuring. This is direct contrast to the loneliness and alienation people can often feel when working from home, or even when working in an office full of people, who just don’t quite get what it’s like being a working parent.

Our vision has always been to create a community of likeminded individuals and join them all together as a force for good. And this is exactly what I want to continue to do with Third Door. I’m committed to creating a movement to bring about a change in the culture of working families, where it is normal to work near your children and also focus on your own career. As such, I want to encourage many more to join our movement of creating places where family & work can grow together and hopefully in the process remove the parenthood penalty altogether.

And wouldn’t it be nice if the next generation of children could access spaces like Third Door as the norm, rather than the exception by the time they have their own children? Well I certainly hope so!