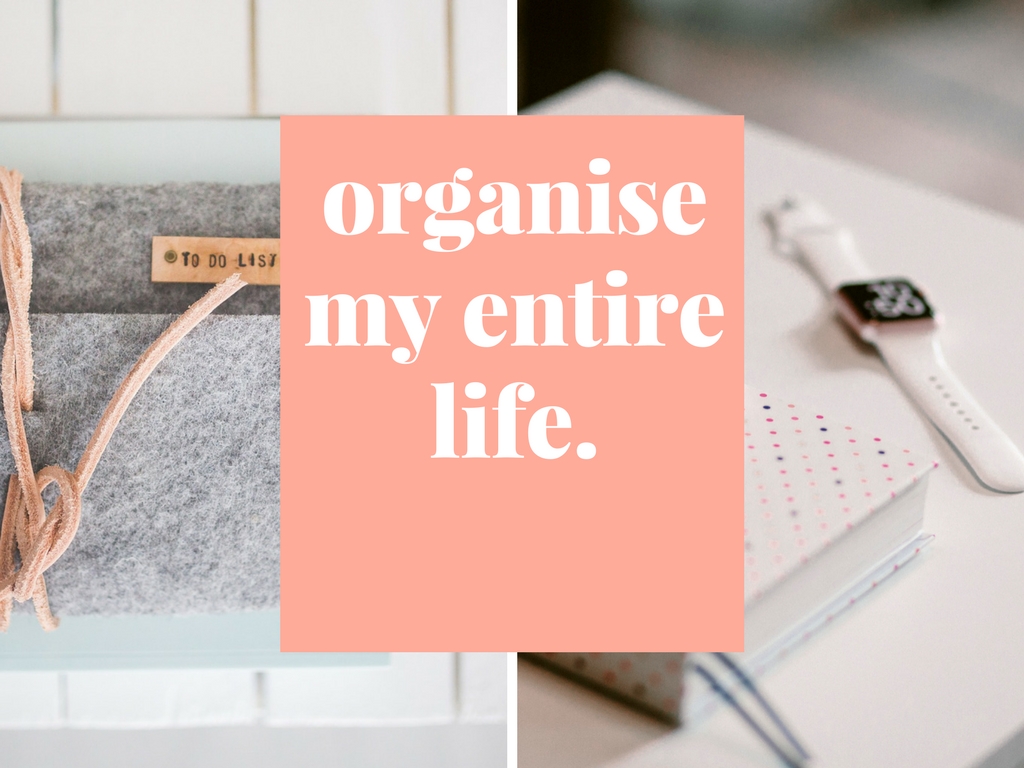 Why in 2017 do so many of us feel overloaded? Our heads are full of lists and reminders and stories and play dates and emails. Our days are full, our bodies are tired and yet we’re pretty certain this is meant to be progress. I’ve created something that I believe can help overcome the overload because I know from experience the struggle is real.

A while ago my Mum passed me a book on pregnancy which she used in the 1980s. It makes for an interesting read:
“If your husband is agreeable, only iron the parts of the shirt that show” I kid you not.

This was the 80’s – I genuinely can’t believe this (and worse) is printed in a book only 30 years ago. The fact it is so shocking surely proves that attitudes have changed, that things have moved forward, hurrah for feminism. And then I hear comments only recently like, “men need to help out more with children and housework” and it does get you thinking. 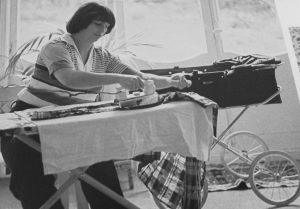 According to the Office for National Statistics women still do on average 40% more unpaid household chores than men. Another study done by Oxfam last year revealed similar findings, suggesting women in the UK spend two days a month more than men on childcare and housework.

I’m pretty sure most of my friends if asked would agree that household chores should be shared equally but that doesn’t mean that this happens in reality. In fact I know from various conversations that it isn’t the case. Even where some chores are shared there does seem to be this unspoken rule that certain things fall to women. You know like Christmas, and birthdays, and present buying, and holidays, and….

Herein lies the problem because when you are also the one working this creates a very real double workload, a complete mental overload – with so much to do and so little time. I know this feeling well because I had it for years, working three days, at home two days, everything else on all the days. It was like this constant battle with no end, a constant state of fire fighting, a constant feeling that any second now it could all fall apart. Of course progress has been made but in certain ways, many of us are still holding together the household and everything else, only now we’re potentially working more as well. 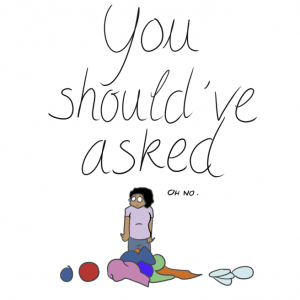 Speaking from personal experience, despite my husband being a feminist and genuinely brilliant, we have still battled with the division of labour. This happened far more following children, before then we both had enough disposable time that it didn’t seem to be a problem. Our roles shifted after I had our first baby and for a while it genuinely made sense that I did more of the chores – I was at home to put the washing machine on ten times a day. But then I returned to work part time and retained not only most of the household chores but this raft of other stuff as well. This is where I think the split of chores is linked to the broader issue of shared childcare responsibility. If the number of fathers working flexibly and part time matched that of mothers I hope we would we see a different picture. But in the meantime it’s like women are making progress on the work front but the opposite just isn’t true.

Emma Clit describes the problem brilliantly with this illustration (pic c/o Emma Clit) about how women retain overall responsibility for the household and that this is problematic. I know I’m a bit of a control freak so fully empathise when GBK says that giving him a list is annoying and even more so when I then criticise some of what has been done (seriously though, those leggings just do not go with that top). Perhaps I am affected by some sort of unconscious feeling (old gender ideologies hold fast) that I should be the one to keep control of the household? Perhaps it’s the same unconscious feeling that means at times I would thank him for getting up in the night to wind our baby, you know because it is my responsibility and he has given me a hand. I don’t remember being thanked every morning (and nor do I expect to be) for feeding our newborn every few hours. This isn’t a lack of manners you realise, just another tiny but significant point around who, even subconsciously, retains ownership. And I think it’s also a reflection of the expectations society places on us as Mothers because I’m not sure this was purely an issue around our relationship. This ‘supermum’ who can achieve anything and everything, all by herself, never stopping, completely selfless. I mean this is an impossible stereotype to live up to. Interestingly, research shows that same-sex couples don’t seem to have such problems with the division of household chores, they don’t have these gender assumptions and societal expectations so instead write their own rules. Now I like the sound of that.

We have to re-work the ingrained stereotypes because they are unhelpful for everyone. I remember sitting in a national conference for working parents a couple of years ago and being told by the speaker to, “cut your partner some slack, he might not do the washing right but at least let him have a go”. Seriously?! There becomes this humour-less rhetoric around, “daddy daycare” and “be brave, daddy is on duty”. I mean can you imagine if someone said, “ooh, watch out, someone has let mummy into a workplace”. 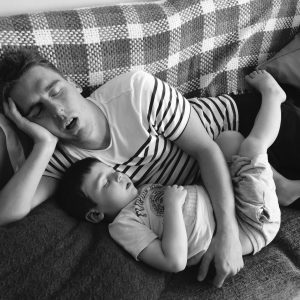 Recently we have done a complete role switch and it has allowed us to see things completely differently. My husband has taken a year off to be with our children and I have become a full time working mum. I no longer do most of the household chores, I’m not trying to hoover round and change a nappy at the same time, I’m not the one wondering what’s for tea and realising I forgot to buy the key ingredient (this happened a lot previously). And I’m not the one trying to do all of this and run my own business pretty much simultaneously. And the result – a massive feeling of relief at finally sharing the load. I feel genuinely lighter because we are sharing what needs to get done equally and fairly.

What’s been really helpful is that we have had these conversations. I think because we were making quite a big, I guess unorthodox (currently) change we sat down and thought this stuff through but that doesn’t have to only happen with a big change. I actually wanted to keep some tasks that he was happy to take (honestly, I can’t stand the last minute birthday present thing) but I’ve also had to learn to let quite a lot of stuff go. And I genuinely think that when change comes again (which it will, next year he will return to work and these roles and tasks will need to be re-divided and distributed in different ways) a return to the old world where I did a disproportionate amount on the home front won’t happen because we will BOTH understand and take responsibility for what needs doing. Which, for the record, I believe is just one, of the massively long list of reasons why shared parental leave right at the start is so so important. 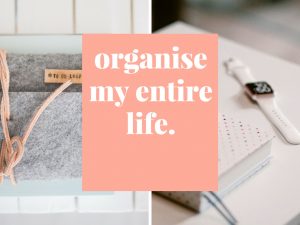 Change needs to happen, as women we are often doing important, valuable work which needs and deserves our attention but without so many compromises. There’s this impossible task of trying to fit more in all the time, our children go to more classes, we should do more socialising, we are expected to work longer hours, we need to keep our house looking tidy. Just, arghhh.

I designed an online course – Organise My Entire Life in the hope of dealing with this overwhelm. I wanted to share some tips on the organisation front because this can undoubtedly help. I hear all the time about the endless lists, stuff everywhere, feeling out of control. We have a system that we’ve used for a few years now that works brilliantly. It was created when we had three very young children, we both worked and things were overwhelmingly busy. It helped and continues to help enormously in holding everything together and making life so much easier. It takes away the mental overload and gets everything into one place. 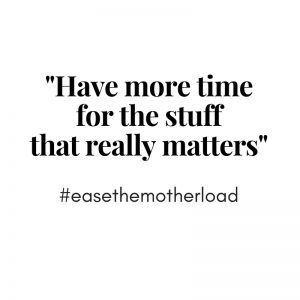 However, it is also far more than just a system for getting organised. This course isn’t just about getting more done, it’s about getting more of the right stuff done. So there are activities to help consider where your time is going at the moment and whether this matches your priorities. There are also templates to revisit who does what, whether you are in a relationship or not this is about sharing the load full stop – with a partner, with friends, with family, with your children if appropriate. This can be especially useful when returning to work after maternity leave when new routines are being formed or indeed when there is any big change (like I mentioned with ours). I really believe this course can help parents find more time for themselves as well as be more productive and effective all round.

I sincerely hope that there will come a time when women don’t struggle to fit everything into their lives with barely time to breathe. Let’s re-write the rules and challenge expectations on this front, because clearly we still need to, even when they are not so blatantly published in a book!

If you want to work out where your time is going currently and set up systems for a calmer and more balanced household then you can find all the details on the four week online course – Organise My Entire Life here.